Probationary: The Game of Life on Licence

A pilot project between The Centre for the Study of Crime, Criminalisation, and Social Exclusion at Liverpool John Moores University, the Foundation for Creative Technology, Liverpool (FACT), and the Howard League for Penal Reform.

This project seeks to explore the ways in which knowledge exchange via the medium of art (animation/film/photography) can lead to a different perspective on individuals’ lived-experience of the criminal justice system. This project is part of a broader venture undertaken by the academic team that seeks to reveal new and progressive ways of understanding criminologically significant phenomena through the collaborative and constructive medium of ‘play’. 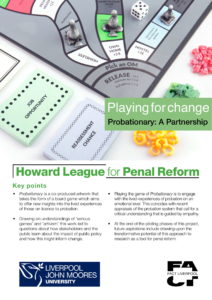 Produced through workshops with men on licence, Probationary: The Game of Life on Licence explores the lived experience of being on probation. Taking the form of a board game, Probationary takes its players on a journey through the eyes of four playable characters as they navigate the complexities of the probation process. Board games, from Monopoly to the Game of Life, contain within them the structures and values of the society in which they are produced, presenting back to us the world in which we live. Taking this as a starting point, Probationary reflects real experiences of being subject to the criminal justice system and presents us with an opportunity to collectively play, understand and discuss such systems within our contemporary society.

As an artwork, the board-game was produced through socially engaged art (SEA) workshops with men on licence, which asked the group to consider their understandings of ‘justice’, ‘luck’, ‘equality’, and ‘sentencing’. As an artistic approach, SEA involves the use of participatory methodologies that place individuals and communities at the centre of the collaborative creative process. SEA’s treatment of social and political issues is often associated with activist strategies – referred to by some as ‘artivism’ – an approach that seeks to effect political change through art.

We learn through Probationary how the current system operates and the game enables players to begin to understand the experience of those on licence to probation. Through the medium of play the game seeks to evoke an emotional response in the player and in doing so the aim is to change ideas about probation and, ultimately, contribute to the process of changing policy.

The Howard League will work with the project team to develop Probationary as a tool to achieve change.

Download the report: Playing for change. Probationary: A Partnership