A project by Hwa Young with Dans, Emilijus, Kye, Oscar, and Riley

PTown Bay MMXXX is a board game co-created with young people at the Nacro Education and Skills Centre in Peterborough, UK who are learning outside the mainstream education system. The game explores the current and near future aspirations of young people faced with multiple disadvantages.

Set in 2030, petrol and diesel car sales have been banned and the Peterborough landscape has been drastically changed by climate change and sea level rises. Players must navigate their way around the newly coastal city, meeting colourful local characters, completing missions, and collaborating and competing with other players.

But this is not a ‘Peterborough Monopoly’. Instead, the locations, missions, characters and map are influenced by the young people’s view of the city they live in.

Designed to engage disadvantaged young people with their community, climate change and the environment, the game will be played in the Nacro Education and Skills Centre in Peterborough for the first time on Monday the 8 November at Metal Cultures Peterborough, and on Thursday the 11 November, to coincide with the Cop26 Climate Change conference.

The climate change movement can often be portrayed as only accessible to those with the privilege of having the time and the money to participate and make meaningful changes. The game is a Season For Change Common Ground commission, a collaboration between socially engaged artist Hwa Young Jung, Nacro, the Howard League for Penal Reform and Liverpool John Moores University . This interdisciplinary collaboration between art, criminology, disadvantaged, disengaged young people and penal reform seeks to inform debates about both social and climate justice and the need to broaden the participation of disengaged communities in causes which have a direct impact upon their lives.

“This project provides a different lens on the climate change debate. The lived experiences of the young people who developed this game with me really highlighted how the big existential issues relating to the climate change barely scratched the surface with them. Not because they were disinterested but the challenges of their daily lives, the immediate environment and the people in their communities felt more urgent. The result is a board game interpretation of an open world video game, in a prophetic vision of Peterborough, based on what’s important to the young people now. An aim of this collaboration to provide opinion formers and policy makers with a different perspective to add to the development of environmental and social policies.”

PTown Bay was produced over 15 workshops held under Covid-19 restrictions, led by the young men’s interest in cars as a vehicle to think through environmental issues. Both the production process and the playing of the game seek to allow young people to explore how their engagement with the environment and nature can impact on their futures in a micro and macro context.

The project was commissioned by Season for Change, a UK-wide cultural programme inspiring urgent and inclusive action on climate change, led by Artsadmin and Julie’s Bicycle, and supported by Arts Council England and the Paul Hamlyn Foundation. 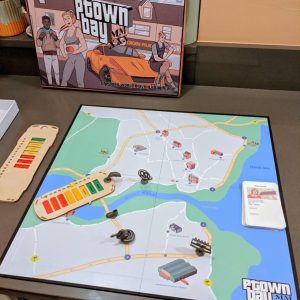 About the research partners:

Common Ground commissions and energises artists and cultural organisations to put climate action at the heart of their programming, with a priority of centring communities and groups that have been previously underrepresented in and excluded from conversations about culture and climate.

Nacro is a national social justice charity with more than 50 years’ experience of changing lives, building stronger communities and reducing crime. Nacro houses, educates, supports, advises, and speaks out for and with disadvantaged young people and adults.

The Howard League for Penal Reform is the oldest penal reform charity in the world. It is a national charity working for less crime, safer communities and fewer people in prison. It is committed to undertaking research and demonstration projects that ensure that unheard voices and experiences are brought to the fore particularly through our established partnership with academics and creative methodologies.

This contribution to the collaboration is led by Dr Will Jackson who is based in The Centre for the Study of Crime, Criminalisation and Social Exclusion at Liverpool John Moores University.

Contact Dr Will Jackson for any questions regarding the criminological research which underpins this project.

Contact Anita Dockley at the Howard League if you have an enquiry about PTown Bay MMXXX as a feature of penal reform campaigning.