The John Sunley Prize winners were announced at the Howard League AGM, on Wednesday 8 November 2017.  From a strong shortlist of 10 entries the competition panel identified the following winners:

Ailsa Bridges, University of Oxford,
The contemporary pains of imprisonment: A study of HMP Grendon

Primary research based on interviews with prisoners to understand how the therapeutic prison regime impacted on them compared with their mainstream prison experience. 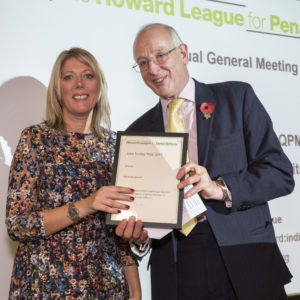 Michelle Brown, University of Cambridge,
An exploration of the challenges families experience when a family member is convicted of a sex offence

Primary research based on interviews with family members to explore this under-researched area to understand the issues they face and the support available to them. 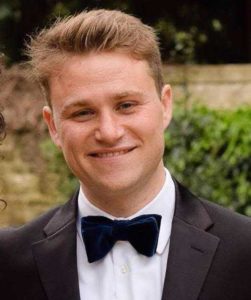 Research analysing the relationship between the role for policing in community cohesion, localised approaches to this and its impact on its practices and relationship with BAME communities.

As the field was so strong two other entries were highly commended: 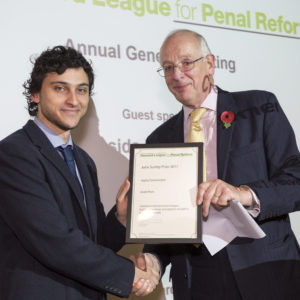 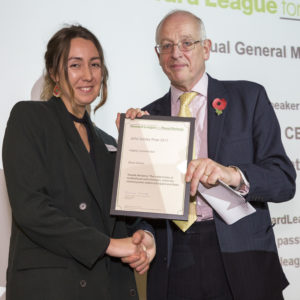 Olivia Tolaini, SOAS, University of London,
‘Double deviancy’: The subjectivities of ‘motherhood’ and ‘criminality’ within the criminal justice system in England and Wales

The prizes were presented by Digby Nelson, CEO of the Bernard Sunley Charitable Foundation.

This is a single-site qualitative study of older male prisoners in an open prison. It found that the experience of imprisonment for older males is extremely complex and that despite enduring exacerbated prison pains on account of their age, many prisoners survived their sentence, utilising innovative coping strategies. The dissertation also found that while older prisoners were generally positive about the future, many found themselves unprepared for resettlement, in terms of accommodation and employment prospects upon release. Finally, the dissertation made findings on the segregation/integration debate, arguing that a strong case exists for older prisoner units..

This study investigates male prisoner experiences of and attitudes towards different forms of prison work. By questioning why
and what types of work prisoners deem ‘good’ and ‘bad’. A typology of prisoner work masculinities is developed to explain why prisoners might develop contrasting masculinities and attitudes towards work generally and prison work specifically, and how these attitudes shape experiences of incarceration.

A qualitative study drawing on interviews with staff and prisoners to look at the prevalence, impact and response to new psychoactive substances in one prison.

As the field was so strong two other entries were highly commended:

The prizes were presented by Mrs Anabel Knight, Chairman of the Bernard Sunley Charitable Foundation. 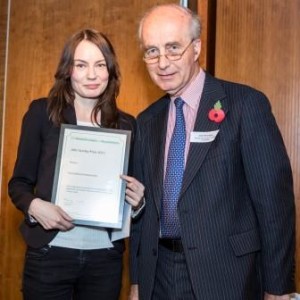 The presentations were made by John Rimington, Director of the Bernard Sunley Charitable Foundation at the Howard League AGM on 4 November 2015.

The winners of the 2014 competition were publicly announced and presented with their award at the Howard League Parmoor Lecture on Thursday 23 October.

The winners of the 2013 Sunley prize were announced on Wednesday 5 June 2013. The three winners were presented with their prizes at the Howard League’s annual Parliamentary wine reception on 4 July 2013.