Breaking point: Prison officer numbers in England and Wales cut by 30 per cent in three years

The number of prison officers in England and Wales has been cut by 30 per cent in three years, figures obtained by the Howard League for Penal Reform reveal today (Friday 11 July). 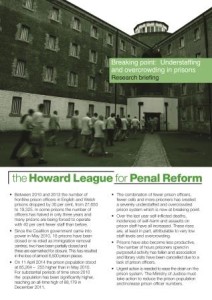 The drop in officer numbers nationwide has coincided with a deepening prison overcrowding crisis and an alarming rise in the number of self-inflicted deaths in custody.

Since May 2010, 18 jails in England and Wales have closed or re-roled with the loss of almost 6,500 places, which means that the increasing prison population is crammed into a diminishing number of establishments.

A planned programme of prison closures would save money and could improve decency and safety if it is complemented by a reduction in the prison population. However, the contrary is the case as the number of prisoners in England and Wales has risen since May 2010, resulting in concerted overcrowding.

The findings are published in the Howard League’s latest research briefing paper,Breaking point: Understaffing and overcrowding in prisons. It warns that suicides, assaults and riots will become increasingly common unless urgent action is taken to increase officer numbers and reduce prisoner numbers.

At 8 July 2014, at least 43 people had committed suicide in prisons in England and Wales during the year so far – a 30 per cent rise on the same point last year, when there had been 33 suicides.

There were 70 suicides in total during 2013 – the highest number for six years.

The number of prisoner-on-prisoner serious assaults was 25 per cent higher in 2013 than in 2012, and serious assaults against staff are at their highest level since recording practices began.

Rioting has increased dramatically. The number of call-outs for the National Tactical Response Group, which deals with serious incidents, rose by 72 per cent between 2010 and 2013.

Frances Crook, Chief Executive of the Howard League for Penal Reform, said: “The prison system is at breaking point. Everyone should be concerned at the crisis in prisons as when people come out of jail they are more likely to inflict more crime on us. Ministers and various MPs have used different figures to try to minimise the impact of prison closures, but the statistics in this report show the true picture. Governors, inspectors and prison officers are joining the Howard League in warning the government that prisons are not just failing, they are dangerous. Violence and drug use is out of control and we will all suffer the consequences. This is the most irresponsible government penal policy in a generation.”

The prison officers’ union, the POA, has released a statement in support of the findings.

It states: “The POA has raised concerns over the link between staff reductions and the increased level of violence, self-inflicted ‎injuries, deaths, poor regimes and acts of indiscipline in our prisons, but saving money is the priority of the Ministry of Justice and Treasury.

“The POA welcome the report and findings and call on the Minister to act quickly to ensure prisons are safe secure and fit for purpose and not warehouses ‎which is the reality under the current regime.”