Children who have been in trouble with the law are being put on electronic tags, given curfews and then sent back to prison because of failures in the system meant to support them, a new report claims today. 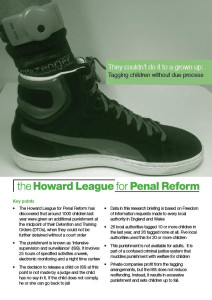 Research by the Howard League for Penal Reform shows how almost 1,000 children were put under “intensive supervision and surveillance” (ISS) last year after being released from prison at the midpoint of a Detention and Training Order (DTO).

Although the measure may be intended to help change lives, the reality is that ISS conditions can be so lengthy and onerous that children find it almost impossible to comply. This means that they can be sent back to prison.

The Howard League’s report, They couldn’t do it to a grown-up: Tagging children without due process, finds that ISS breaches may account for a ‘significant proportion’ of the child prison population.

The charity has represented children who have experienced excessive punishment arising from the inappropriate use of ISS programmes.

It is calling on the government to end the use of midpoint ISS, arguing that the sanction creates injustice and is too costly. The Ministry of Justice spent £1.4m on private security companies tagging children on DTOs in 2010-11.

ISS, which can only be imposed on children, involves 25 hours of specified activities a week, electronic monitoring and a curfew.

Although the responsibility for authorising ISS at the midpoint of a child’s DTO lies with the Justice Secretary, the Howard League has found that the decision is effectively taken at a local level, based on the recommendations of Youth Offending Teams.

The report reveals that children are victim to a postcode lottery. While 26 local authorities tagged 10 or more children last year, a further 26 had no children released at the midpoint on ISS. There is no discernible pattern to account for this variation.

ISS conditions can be so lengthy and onerous that children find it almost impossible to comply. This means that they can be sent back to prison

The report also shows how the inappropriate use of ISS programmes has led to children being punished up to four times for one offence.

Some children were placed on ISS when they had already failed the same programme as part of a community sentence. In their eyes a further ISS on release from prison was a third punishment for the original offence. A number have unsurprisingly failed to comply with the conditions of their ISS on release and been returned to prison, resulting in a fourth punishment for the original offence.

Data from the Ministry of Justice suggests that between 30 per cent and 50 per cent of children on ISS programmes are breached, with more than half of those breaches resulting in custody.

Frances Crook, Chief Executive of the Howard League for Penal Reform, said: “This is part of a confused criminal justice system that muddles punishment with welfare for children. It is setting children up to fail. We are punishing children repeatedly over several years for a single offence and this cannot be fair. Some youth offending teams are applying curfews and tags on children in a mistaken belief that this somehow helps them, whereas the truth is that it is a fast track back to jail. We think it could account for hundreds of children ending up in prison each year, not for what they have done or for public safety, but because they go stir crazy on their second or third curfew and tag for an offence committed months or even years ago. The only people profiting from this practice are the private security companies supplying the tags.”

Kevin was a child in care with a poor school history and significant mental health problems, including severe AHDH. Kevin spent two spells in the community under the ISS programme and two periods in jail – all for the one offence.

Kevin was very vulnerable, having experienced a significant bereavement and witnessed domestic violence and alcohol abuse within his family. He was given a Youth Rehabilitation Order (YRO) with an ISS for his original offence but found it difficult to keep up with all his appointments on the programme. He was breached and taken back to court, which imposed a DTO.

In recognition of his vulnerability, he was sent to a secure training centre for young or vulnerable children. At the centre, medical staff observed the extent of his mental health problems. Shortly before release at the end of his punishment term, he was told that he would again be placed on an ISS with a tag. Kevin was extremely distressed by this and felt it would be very difficult for him to cope on the programme. He felt he had served his punishment term and it was not fair.

The same local authority that demanded he be released on to the programme failed to tell him where he would be living until just before his release. Instead of preparing for a positive release under supervision he was filled with fear and anxiety, living in an unknown location with intensely restrictive conditions: he felt he was being set up to fail.

Kevin was released on an ISS and subsequently breached for a second time. A court returned him to jail to complete the remainder of his DTO in custody.

When he was finally released after having served an additional three months, he had no supervision at all.

Robert was convicted of a street robbery. A DTO was imposed, to be served half in jail and half in the community under the supervision of a Youth Offending Team.

Robert was locked up in a secure training centre and not a prison because it was recognised that he was particularly vulnerable. In the centre, he started to engage in education and found that he liked it and was good at it.

Although he got into some trouble at the beginning of his sentence, by the end of his time there all of the professionals working with him recommended that he should be released early on an electronic tag until the midpoint of his sentence, the tag reflecting that he was still in the punishment part of his sentence.

There is a presumption that the Justice Secretary will grant one or two months’ early release on tag to all young people serving DTOs. In Robert’s case, however, the Secretary of State decided he should spend the whole punishment term in jail, because of an incident at the beginning of his sentence.

Robert was disappointed but decided to make the best of it and was gearing up for a fresh start in the community. He asked to be placed in a new area to remove himself from negative peers and had plans to go to college. However, at his final meeting before his midpoint release, his community justice officer informed him that he would be released on an electronic tag anyway as part of another ISS programme. Robert had no idea that he could challenge this.

Robert was released on tag to a new area under the ISS programme. Due to poor planning, he did not get the planned activities that form part of the programme for several months. Robert felt he had been set up to fail.