Children living in children’s homes are being criminalised at excessively high rates compared to other boys and girls, including those in other types of care, the Howard League for Penal Reform reveals today (Wednesday 30 March).

Research by the charity suggests that there is a systemic problem across England and Wales that leads staff to resort to the police, often over minor incidents that would never come to officers’ attention if they happened in family homes.

Police data indicates that some forces have been called thousands of times in the last three years. 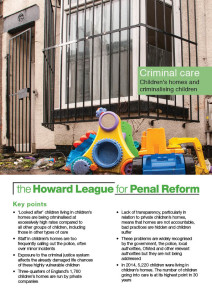 The findings are published in a Howard League report, Criminal Care: Children’s homes and criminalising children. It calls for more support to be given to looked after children during their teenage years so that they are not pushed into the criminal justice system by homes that are supposed to be helping them.

The report draws on Department for Education statistics, which indicate that about 4 per cent of children aged 10 to 12 who live in children’s homes have been criminalised, rising to more than 19 per cent among children aged 13 to 15.

The report states: “Levels of criminalisation of children in children’s homes increase dramatically between the ages of 13 and 15.

“The children who are being criminalised whilst teenagers are the same children who, when younger, were sympathetically viewed as vulnerable, innocent and highly deserving of society’s help and protection.

“There appears to be a ‘tipping point’ around the age of 13, at which time these children lose society’s sympathy and, rather than being helped, they are pushed into the criminal justice system.”

Frances Crook, Chief Executive of the Howard League for Penal Reform, said: “These children have been taken into care because they are in dire need and their parents cannot, or will not, look after them. They are wonderful young people who have had a really bad start in life. They deserve every chance to flourish. Private companies, charities and local authorities that are paid a fortune by the taxpayer should give these children what they need and deserve.”

The report, which supports the Howard League’s ongoing campaign to keep as many children as possible out of the criminal justice system, states that three-quarters of England’s 1,760 children’s homes are run by private companies.

It gives warning that a lack of transparency, particularly in relation to private providers, has meant that homes are unaccountable, bad practices are hidden and children suffer.

The government, police, councils, Ofsted and other relevant authorities are all aware of these problems, but they are not being sufficiently addressed, the report adds.

The Howard League wrote to every police force in England and Wales, seeking data showing how often they are called to incidents at children’s homes. All but one force responded, and they each reported difficulties in accessing and collating the requested information.

There appears to be a ‘tipping point’ around the age of 13, at which time these children lose society’s sympathy and, rather than being helped, they are pushed into the criminal justice system.

Information was provided for 17 police force areas, with the majority of responses showing an increase in reported incidents. The data is not directly comparable – some responses include call-outs for “missing” or “absent” children, others only information relating to reports of criminal behaviour – but they clearly show that there is a high level of police involvement with children’s homes.

In 2013 the House of Commons Justice Committee heard one example of officers being asked to attend a children’s home to investigate a broken cup.

Police have raised a number of issues with the Howard League that may explain why the rate of criminalisation of children in children’s homes is so high.

Forces told the charity that private contractors running children’s homes had used police cells as respite to cover staff shortages and because staff were not trained and competent to deal with children’s behaviour.

In 2013 the House of Commons Justice Committee heard one example of officers being asked to attend a children’s home to investigate a broken cup.

Police suggested that they were picking up the pieces of a “social care deficit”, and that children were being pushed into the criminal justice process rather than receiving the support they needed from local authorities and children’s homes.

The Howard League heard that there was a lack of confidence in the standard of children’s homes and a perception by police that vulnerable children would be better cared for in the cells.

Police also suggested that, when children in care were arrested, private children’s homes often refused to take them back. Although there was a reasonable expectation that the home should let the children back in, this was more likely to happen at midday the next day than at four in the morning.

In 2014, there were 5,220 children living in children’s homes. The number of children going into care is at its highest point in 30 years.

*This information was provided by Lincolnshire County Council and relates only to local authority-owned children’s homes, including one Secure Children’s Home.