Financial cost of suicide in prison is up to £300m a year, Howard League research suggests

The emotional cost of suicide in prison is unquantifiable, but research published today by the Howard League for Penal Reform indicates that the financial cost to the taxpayer could be as much as £300million a year.

The research briefing, The cost of prison suicide, is the first publication of its kind to examine the financial impact that a prisoner’s death by suicide can have on public services in England and Wales. 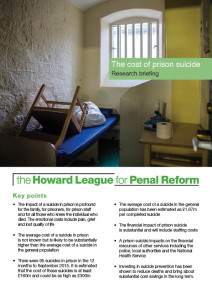 It sets out how the response to a death in custody puts pressure on numerous services – including the prisons themselves, police and local authorities – and shows how that money could be better spent on measures to prevent people taking their own lives in the first place.

The report will be discussed by justice, health and home office ministers and senior managers from the prison service at the next meeting of the Ministerial Board on Deaths in Custody, scheduled for Tuesday 1 March.

Figures published last month by the Ministry of Justice revealed that deaths by suicide have risen by 46 per cent in the last three years – from 61 in 2012 to 89 in 2015 – as prisons have struggled to cope with growing numbers of prisoners, chronic overcrowding and deep staff cuts.

Frances Crook, Chief Executive of the Howard League for Penal Reform, said: “No one should be so desperate whilst they are in the care of the state that they take their own life. Similarly, when conditions in prisons are so dire that people are taking their own lives at a rate of one every four days, no one should have to rely on economic analysis to make the case for change. Nevertheless, today’s briefing paper shows how greater investment in suicide prevention would make financial sense, generating savings for public services that would benefit everyone. As we heard from the Prime Minister earlier this week, prisons are failing and wholesale reform is needed. Reducing the prison population remains the key to preventing more unnecessary pain and suffering.”

The briefing paper is the first of a series to be published as part of a joint programme – led by the Howard League and Centre for Mental Health – aimed at preventing people from dying by suicide in prison.

It mirrors work done by public health researchers, who have begun to focus on the economic costs of a death, for example from smoking or heart disease, to highlight how investment in prevention and health promotion can generate savings in other areas.

A similar approach has been taken within the rail industry, where about 400,000 minutes of delays on the network in 2013-14 were attributed to suicides. Network Rail has invested in a suicide prevention programme, in partnership with the Samaritans, which includes training for station staff to recognise those at risk of suicide and provide help and support.

The briefing paper states that the financial costs resulting from a suicide in prison are likely to be substantially higher than the average cost of a suicide in the general population.

Whether a suicide occurs in prison or in the community, costs will include the police investigation, the cost of an inquest and funeral expenses. However, when a person dies whilst in the care of the state, there will be additional costs.

Deaths by suicide have risen by 46 per cent in the last three years – from 61 in 2012 to 89 in 2015 – as prisons have struggled to cope with growing numbers of prisoners, chronic overcrowding and deep staff cuts

The briefing paper states that factors such as staff cuts and overcrowding are having a negative effect on suicide prevention measures in prisons, including training.

In Lewes prison, in East Sussex, the Independent Monitoring Board reported last year that more than 2,000 designated hours of safer custody work had been lost.

A report published last year by Her Majesty’s Inspectorate of Prisons found that only 58 per cent of staff at Aylesbury prison, in Buckinghamshire, had completed suicide prevention training, despite a recommendation being made in a previous report that all staff should receive a refresher course.

The briefing paper calls for a “holistic approach” to improving the mental well-being of all prisoners, not just those identified as at risk. It also recommends a reduction in the prison population, finding that “too many people are being remanded or sentenced to custody when they do not need to be there”.

The paper recommends that the Ministry of Justice commission research to identify the average cost of a death by suicide behind bars.

It states: “There are major gaps in attempting to provide an estimate of the cost of a death in custody, in part due to the lack of available data and the disjuncture between different government departments involved following a death in custody.

“A thematic review conducted by the then Chief Inspector of Prisons in 1999 noted that suicide was ‘everyone’s concern’ and that is still the case today. Yet issues such as mental health and suicide prevention in prisons are often not considered in a holistic way.”

Andy Bell, Deputy Chief Executive of Centre for Mental Health, said: “Every loss of life due to suicide is a personal and family tragedy. Today’s report also demonstrates the wider costs of suicide deaths in prison. It is a reminder of how important it is to take action to protect the mental health of all prisoners and to ensure people with mental health difficulties are offered help as quickly as possible when they come into contact with the criminal justice system.”