England and Wales should follow Scotland’s lead and scrap the imposition of additional imprisonment for rule-breaking in prisons, a report by the Howard League for Penal Reform recommends today (Monday 13 August) as figures show that punishments totalling almost 1,000 years were handed down in 2017.

The rising tide: Additional days for rule-breaking in prison reveals how the disciplinary system in prisons has become unsustainable, with the total number of additional days of imprisonment handed down nationwide more than doubling in three years.

The use of additional days has increased as prisons have been brought to breaking point by overcrowding and staff shortages – soaring from fewer than 160,000 in 2014 to almost 360,000 last year. This has coincided with rising levels of self-injury behind bars.

The Howard League’s report breaks down the figures for each prison in England and Wales, revealing the hotspots where adjudicators are resorting to draconian measures most often.

It also highlights good practice at prisons that have managed to buck the trend – either by using restorative approaches or by training and empowering staff to respond to conflict in other ways.

Additional days, which are overwhelmingly imposed for non-violent infractions of rules, contribute to the deterioration of the prison system by exacerbating overcrowding and producing a sense of unfairness among prisoners. Abolishing them, as was done in Scottish prisons more than 16 years ago, would help to address these problems.

Frances Crook, Chief Executive of the Howard League for Penal Reform, said: “The explosion in the use of additional days of imprisonment has been a catastrophe for the prison system. Rather than solving problems, it has created new ones – piling more pressure on the prison population and worsening overcrowding, which in turn leads to more drug abuse and violence.

“These figures illustrate the urgent need for reform. We need to see a culture change in jails, from top to bottom. A prison that resorts again and again to further punishment is an unhealthy prison.

“Scrapping the imposition of additional days would make prisons safer, fairer and less likely to churn out people who go on to reoffend in the community. It has worked in Scotland and, with the right approach, it would work here, too.”

The report reveals vast disparities in how frequently additional days are imposed at different prisons. Between 2016 and 2017, the number of additional days rose in 85 prisons and fell in 30.

The Howard League found that the differences between prisons could not be explained in terms of their size, populations or locations. Instead, it appears to come down to prison leadership and institutional culture.

The report finds that running a prison that imposes substantial numbers of additional days is a choice. It is an enactment of a punitive and unjust culture and is neither inevitable nor necessary.

Based on its research, the Howard League is calling for prison inspection guidelines to be augmented so that the overuse of punishment is seen as a warning sign of an unhealthy prison.

Prisons should operate in a way that reflects the highest standards of justice, but the Howard League’s research has found that the system for awarding additional days is inherently capricious, inconsistent and disadvantageous for vulnerable people. 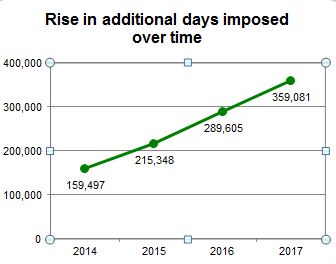 The unfairness is particularly acute for children. Children held in secure training centres and secure children’s homes cannot be given additional days. Children in young offender institutions can, but not if they are serving detention and training orders. This results in a two-tier system where children in the same institution can behave the same way but be treated differently.

Howard League analysis reveals that the Ministry of Justice’s official statistics about additional days have repeatedly been stated incorrectly.

A Ministry of Justice data release from April inaccurately stated that “a total of 21,081 additional days were added to prisoner’s (sic) sentences”. This figure in fact represents the number of instances of additional days being imposed. At any such instance, up to 42 days can be added to a prisoner’s sentence. This means that official figures vastly understate the scale of the problem.

In December 2017 the Howard League hosted a ‘solutions summit’ to explore the reasons behind the rising number of additional days. The meeting, which was attended by prison staff, officials and other criminal justice experts, heard that governors in Scotland had found no evidence that the abolition of additional days north of the border had had a negative impact on behaviour.

In a video recorded for the event, which can be viewed on the Howard League website, the Chief Executive of the Scottish Prison Service, Colin McConnell, said: “In my view there is no evidence whatsoever – certainly in our 16 years of experience since added days were removed from our administrative capacity – that could in any way justify the introduction of added days, or for that matter justify their perpetuation.”

Additional days of imprisonment imposed in England and Wales

Durham prison has implemented a restorative justice programme. In the event of fights or disputes, officers have been trained to facilitate conferences in which prisoners can discuss what happened, what they were thinking and feeling, who has been affected and what they should do as a result.

The programme at Durham has been so successful that the regional custody team has picked it up, with courses to be rolled out elsewhere in the region. Between 70 and 80 officers have been trained so far.

Following a very poor inspection report in December 2016, Guys Marsh commenced the Growth Project. This whole-prison, research-informed programme involved training officers on relationships and how to deal with conflict.

Wellbeing days were organised on the wing for prisoners to provide an incentive for good behaviour. The prison has introduced ‘rehabilitative adjudications’ aimed at understanding the reasons for people’s behaviour and referring them to support services.

The number of additional days handed down to men in the prison fell by 23 per cent in one year.

Glen Parva closed in June 2017. Population figure shown here is for 31 March 2017 and is therefore not included in column totals.

This table includes figures for Peterborough men’s prison only.

Downview reopened in May 2016.

This table includes figures for Pterborough women’s prison only.

This table includes Feltham, Swinfen Hall and Aylesbury prisons as they all have wings that hold young adults predominantly. Parc prison holds all ages and is therefore found in the table for men’s prisons.