Former prisoners share their experiences of sex in prison

The Commission on Sex in Prison’s final report, published today (Tuesday 17 March), features accounts from former prisoners speaking for the first time about their experiences of sex behind bars.

Sex in prison: Experiences of former prisoners is the fifth and final briefing paper published by the Commission, which was established by the Howard League for Penal Reform and includes eminent academics, former prison governors and health experts.

Recommendations from the Commission’s two-year inquiry will be presented today (Tuesday 17 March) at a conference in London. 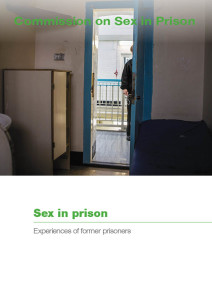 The Commission sought permission to interview current prisoners about their experiences of sex in prison, but this approach was blocked by the Ministry of Justice.

However, Dr Alisa Stevens, Lecturer in Criminology at the University of Southampton, was able to interview 26 former prisoners during the summer of 2014 – 24 men and two women.

Her report concludes that a national survey of both the serving prison population and former prisoners, fully supported by but independent of the National Offender Management Service (NOMS), is “urgently required” to understand better the scale of consensual and coercive sex in prison.

The former prisoners interviewed by Dr Stevens had been jailed for a wide range of offences. Eighteen interviewees self-identified as heterosexual, four as gay, and four as bisexual.

They usually had sex in the cell of one of the participants or in the showers, during periods of association. Some men who shared cells had sex at night. When asked how many sexual partners interviewees had had in prison, numbers ranged from one to “about 30, 35”.

One heterosexual man said that he had had consensual sex with gay or bisexual prisoners “out of necessity”. He said he had resumed exclusively heterosexual relationships since leaving prison, and he added: “I’m completely straight; what happened then was just about having my sexual needs met, in a particular time and place, where I couldn’t get [heterosexual] sex.”

The research project found that the availability of condoms and dental dams – to minimise prisoners’ risk of exposure to sexually transmitted infections – varied from prison to prison.

Some sexually active men were refused condoms, while others were able to obtain them from healthcare but often in circumstances which did not allow for any privacy.

Sometimes condoms were rationed. At a Category C prison, an interviewee was “shocked, to put it mildly” to be informed in reception that he was entitled to six condoms and a tube of lubricant, but “you had to return the used [condoms] in a bag to healthcare before you could get any more”.

Interviewees who had not personally had sex in prison were sometimes aware of consensual sex taking place among other prisoners.

Neither of the two women interviewed for this research had personal experience of sex in prison, but both confirmed that the formation of supportive, “close friendships” and strong emotional bonds were commonplace among women prisoners, and sometimes became sexual.

“I couldn’t believe how much kissing and cuddling was going on,” said one woman. “It was a big, big shock, a big culture shock. Someone like me, never been in prison before; I didn’t know where to look half the time!”

A national survey of both the serving prison population and former prisoners is “urgently required” to understand better the scale of consensual and coercive sex in prison.

Generally, among the participants in this study, there was a high degree of tolerance towards other prisoners participating in consensual sex. “I think the general attitude,” said one, “certainly among long-termers is, whatever people get up to, behind their door, is up to them.”

A common observation was that prisoners who became indebted to others, typically as a result of drug habits or gambling losses, and/or who had very limited money to buy commodities they desired, would offer “sexual favours” in lieu of payment or in return for “canteen”.

Other interviewees had observed vulnerable individuals, who were socially isolated and lacked external financial support, being targeted or “groomed” for sex. In these circumstances, it is highly problematic to describe the sexual activity as genuinely consensual, because it was only offered as a commercial exchange.

Three male interviewees disclosed that they had been raped in prison, by prisoners. Three others had been threatened with rape by other prisoners.

“Quite simply, what happened ruined my life,” said one. “I’ve wanted to talk about it for a long time, but the means were not there. Because nobody wants to know, nobody wants to hear about this horrendous, horrendous abuse.”

One interviewee had been raped by five assailants in a cell and required in-prison medical treatment. He was encouraged to report the rapes by the nurse who treated him, but when he told a principal officer what had happened, he was dissuaded from making a formal complaint. As a prisoner in the early stages of a long sentence, he was advised that to “grass” upon other prisoners in this way would “mark his cards” for the rest of his time inside and would increase his chances of victimisation in the future.

Some interviewees observed that they had known some openly homosexual couples being allowed to share cells in some institutions. NOMS policy, however, is that men who are known, or are discovered, to be in a sexual relationship are not allowed to share a cell and will be separated.

One interviewee reported that a senior officer had moved a young prisoner, who had confided he was “confused” about his sexuality, into the cell of an openly gay, older prisoner, in order to help him “sort himself out”. This action had been perceived at the time as well-intentioned, but it underlines the need for staff to be trained in how to manage discussions around sex and sexuality and how to recognise the potential for grooming and abuse.

Alisa Stevens, Lecturer in Criminology at the University of Southampton and Academic Consultant to the Commission, said: “This research, drawing on the experiences and knowledge of former prisoners, has illustrated the urgent need for coherent and consistently applied policies which recognise and respond to the reality of consensual and coercive sex in prison.”

Chris Sheffield, Chair of the Commission on Sex in Prison, said: “Dr Stevens’s paper gives an important perspective to the subject. It is a great shame that permission was not granted to afford the opportunity for those serving prison sentences to contribute to the research in this matter.”

Frances Crook, Chief Executive of the Howard League for Pena Reform, said: “This final report of the Commission shows that sexual activity is widespread in prisons and must be seen as an urgent health issue. The Commission has conducted the first systematic review of sex in prison and it is clear important lessons must be learned, and fast.”