The Carlile Inquiry 10 years on

The “illegal, systemic, physical abuse of children, sanctioned by the state” is laid bare today (Monday 20 June) in a landmark report on the use of restraint, solitary confinement and strip-searching in child prisons in England and Wales.

The report, published by the Howard League for Penal Reform, reveals that the majority of children in custody are detained in institutions where restraint is routinely – and unlawfully – used to get them to obey orders. 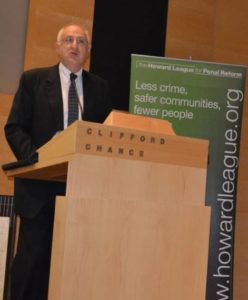 Children have suffered 4,350 injuries in the last five years while being restrained. Although the number of boys and girls in custody has fallen, the rate of restraint has more than doubled.

The report, The Carlile Inquiry 10 years on, looks at what progress has been made since the Howard League published the findings of an independent inquiry, chaired by Lord Carlile of Berriew QC, into the use of restraint, solitary confinement and strip-searching in penal institutions for children.

Lord Carlile’s team recommended that restraint should never be used as a punishment or to secure compliance. The courts have since held that using physical force on a child to get them to do as they are told is unlawful. It has been supposedly banned in secure training centres and it is not used in secure children’s homes. Today’s report shows that this unlawful practice is widespread in young offender institutions, however, and accounts for 22 to 34 per cent of all times force is used on children.

In one incident, a boy was restrained for refusing to leave a room after a review into whether he was at risk of harming himself.

In one incident in Cookham Wood prison, Kent, a boy was restrained for refusing to leave a room after a review into whether he was at risk of harming himself. Inspectors found that force was instigated quickly and escalated to an officer causing the boy pain by kicking him.

The report states that more than a third of all approved restraint ‘techniques’ that can be used on children involve force that causes the deliberate infliction of pain.

It comes as police continue to investigate allegations of child abuse at Medway secure training centre, in Kent, which was the subject of a BBC Panorama documentary broadcast in January. Footage from the programme appeared to show the use of unlawful restraints on children.

The Carlile Inquiry also recommended that the routine strip-searching of children should end and be replaced by a risk-led approach. After continued campaigning by the Howard League, this new approach has been adopted.

In practice, however, there remain concerns that too many children are being strip-searched. The Howard League legal team continues to come across cases where children have been strip-searched inappropriately.

Lord Carlile of Berriew QC said: “I am very pleased that, as a result of my report and thanks to tireless campaigning by the Howard League, children in custody are no longer routinely strip-searched. It shows that change for the better can happen. We now need the Ministry of Justice to go further.

“It is time that the government recognises that the use of force on children, simply to make them do what they are told, is both unacceptable and unlawful. A healthy response to children in trouble with the law, which has their welfare at its heart, would recognise this use of violence by adults as an admission of failure.”

Frances Crook, Chief Executive of the Howard League for Penal Reform, said: “There is much to celebrate in the story of children in conflict with the law because the numbers are significantly reduced, but still children in custody are mistreated, abused, and suffer a punishing regime.

“I fear that the government will attempt to invent new forms of child custody that might simply replicate the abusive regimes of the past 20 years.”

Another central recommendation of the Carlile Inquiry was that prison segregation units should not be used for children. In 2006 the inquiry described these units as “little more than bare, dark and dank cells that exacerbate underlying risks and vulnerabilities”.

Today’s report states that little has changed in the intervening years. There is no centrally-held data on the number of children placed in segregation units, nor any information on why and for how long children are confined.

The most recent survey of children in prison found that more than a quarter of boys had been held in segregation units at some point.

Earlier this year, inspectors who visited Werrington prison, Staffordshire, raised concerns about the increasing number of children who were segregated for excessive periods. They included a boy who had spent 89 days in the segregation unit.

An inspection report revealed that a boy had been held in a segregation unit for almost four months.

An inspection report published last year revealed that a boy had been held in Cookham Wood’s segregation unit for almost four months.

The long-term effects of solitary confinement on children are not well studied. The United Nations Special Rapporteur on Torture, studying its impact on adults in 2011, concluded that “some of the harmful psychological effects of isolation can become irreversible” after 15 days.

Today’s report states that the use of solitary confinement is more widespread in children’s prisons than when the Carlile Inquiry examined the problem 10 years ago.

Prisons, faced with problems such as staff shortages and rising violence, have increasingly imposed restricted regimes. This means that children have been held in conditions of solitary confinement on main prison wings, locked in their cells for 23 hours a day.

An inspection of Feltham prison in London found that boys on the most restricted regime had to choose between a shower, telephone call or exercise within a 30-minute period.