Thousands of women are criminalised needlessly, MPs and peers find

Thousands of women in England and Wales are criminalised needlessly every year, an influential panel of MPs and peers supported by the Howard League for Penal Reform reports today (Tuesday 30 June). 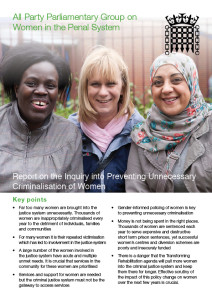 The All Party Parliamentary Group on Women in the Penal System (APPG) finds that money is being wasted on “expensive and destructive” short-term prison sentences while successful women’s centres and diversion schemes are struggling for funding.

It gives warning that recent changes to probation – introduced as part of the government’s Transforming Rehabilitation agenda – could pull more women into the criminal justice system and keep them there for longer.

The APPG’s findings are outlined in its Report on the Inquiry into Preventing Unnecessary Criminalisation of Women, to be presented today at its Annual General Meeting.

The report states that, for many women, it is their own repeated victimisation that has led them to become caught up in the criminal justice system.

A Chief Constable told the inquiry that many women who came into contact with the police were “trapped in a cycle of multiple disadvantage and where domestic violence was a common occurrence”.

The APPG urges the government to prioritise funding and support for community services to help the large number of women in the system with acute and multiple unmet needs.

The APPG was set up in 2009 with Baroness Corston as chair and with administrative support from the Howard League for Penal Reform.

The group works to increase knowledge and awareness of issues around women in the penal system. It also pushes for the full implementation of recommendations made by Baroness Corston in 2007 in The Corston Report: A review of women with particular vulnerabilities in the criminal justice system.

The report states that, for many women, it is their own repeated victimisation that has led them to become caught up in the criminal justice system.

Today’s report states that women commit far fewer crimes than men and their offences are typically less serious, illustrated by the fact that men make up 95 per cent of the prison population.

In the 12 months ending June 2014, 9,204 women went to prison either on remand or under sentence. The APPG heard evidence that 70 per cent of the women sent to prison on remand by magistrates courts do not get a prison sentence either because they are not guilty or because their offence was not serious enough to merit custody.

The report raises concerns that, as a result of the Transforming Rehabilitation changes, women are being shoehorned into a system designed with the privatisation of probation services for men in mind.

Services such as women’s centres and diversion projects could all cease to operate if private providers fail to fund or co-operate with them, the APPG reports. This would undo years of successful work.  The Ministry of Justice only recently published research showing that women’s centres significantly reduce reoffending.

Respondents to the inquiry feared that one of the consequences of Transforming Rehabilitation would be a rise in the number of women being criminalised for very low-level offences at an early stage. They raised concerns that expertise in working with women would be lost, and that women could be drawn into the system as providers seek to hit targets that would trigger bonus payments.

The report states: “Women can be seen as easy targets who are unlikely to reoffend and can be provided with cheap, unnecessary services, allowing companies to hit targets and thereby increase profits.”

Baroness Corston, Chair of the All Party Parliamentary Group on Women in the Penal System, said: “This important inquiry considered issues that affect the lives of thousands of women. We are at a crossroads and decisions on resources being made today could make a difference for a generation. The APPG is calling on the new government to protect women’s centres that are centres of excellence. We can protect the public, use scarce resources effectively and economically and give better life chances to women.”

Frances Crook, Chief Executive of the Howard League for Penal Reform, said: “Far too many women are being criminalised by a broken system. The evidence given to parliamentarians was overwhelming. Too many women are arrested, prosecuted, sanctioned and imprisoned. Change is needed and the report from the APPG on Women in the Penal System provides a route forward.”