Good practice in Staffordshire and Stoke-on-Trent

This post reports how a multi-agency team in Staffordshire and Stoke-on-Trent analysed local data in order to understand criminalisation of children in care in their areas.

In our good practice in policing briefing we used an example of work done by West Mercia Police to show how analysis of data held within forces could help the police identify children’s homes that were regularly calling the police. The improved understanding enabled the police to work with homes to address issues with a view to reducing call-outs and criminalisation. The officer leading the work in West Mercia was Jennie Mattinson. Jennie has recently moved to Staffordshire Police to take up the post of Detective Superintendent and Head of Partnerships & Safeguarding. She contacted us towards the end of last year to invite us to meet her new team and present our work to a multi-agency meeting in Stoke-on-Trent.

In December we attended the Stoke-on-Trent Children, Young Person and Families Partnership Board in Stoke’s beautifully restored council building to talk to practitioners from the police, the county council, health and youth justice agencies. We found that professionals were well apprised of the problem of disproportionate criminalisation of children in residential care. In 2017, a multi-agency group in Staffordshire and Stoke-on-Trent had conducted a research project with a view to understanding why children in care in their areas were over represented in the criminal justice system.

The report they produced included some interesting data. Data – the lack of it – is an issue that we are addressing in the programme, so we are always delighted to come across data analysis that has been done by local agencies that can help throw light on the limited evidence available nationally.

The findings of the report are very much in line with those of our own research. The analysis of police and other data showed that that looked-after children who are formally criminalised are more likely to be in residential children’s homes rather than other care placements and to have experienced more placement changes. They are also more likely to have been reported missing from care placements and on more occasions than children who have not been criminalised during the year.

The report provides significant insight into the issue of criminalisation. Some of the key findings are set out below.

Number of looked after children in the two areas

Reflecting national trends, the numbers of children coming into care in Stoke and Staffordshire have been increasing in recent years. On 31 March 2016, the two areas had corporate parental responsibility for 1,635 local children. Additionally, during 2015/16, over 900 children were placed in Stoke and Staffordshire from other local authority areas.

The rates of crime during 2015/16 were significantly higher amongst children in care compared to the general population across Staffordshire and Stoke-on-Trent:

Offending rates amongst children from other local authorities

Data from Staffordshire Youth Offending Services (YOS) gave an insight into how many of the children who were placed into the area by other local authorities were coming into contact with the criminal justice system. The YOS worked with 550 children in 2015/16; of this number around a third of children were looked after children and within this group over two-fifths (42 per cent) came from other areas.

Recorded offence type for children and young people aged 10-17 in Staffordshire and Stoke-on-Trent, 2015/16 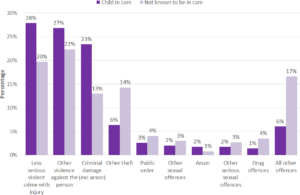 The data showed that around 31 per cent of Staffordshire children who had three or more placements offended during 2015/16 compared with eight per cent who did not move during the year. A similar pattern was seen for Stoke-on-Trent where around one in five children (22 per cent) who had three or more placements offended compared with only eight per cent of children who had remained in placement throughout the year.

Other points of interest

The analysis showed that children in care were more likely than children who are not in care to commit offences in November. It was surmised that this might have something to do with the difficult build up to Christmas for children who were not with their families during this time.

A significantly higher proportion of offences were recorded as being committed by children in care between 1pm and 3pm, between 6pm and 7pm and between 10pm and midnight. The report stated that anecdotal evidence suggested that ‘anti-social behaviour’ usually happened before education in the morning and towards the end of school days as some young people struggled to maintain attention all day. Meal times could also be disruptive and during the evenings there could be resistance to curfew times and bedtimes.

Conversely a higher proportion of offences were committed by those not known to be in care between 3pm and 7pm (peaking between 3pm and 4pm around the time school finishes) and between midnight and 1am.

Consultation with young people conducted by Staffordshire County Council’s YOS Voice Project in October 2016 found that many young people were able to relate offending behaviour either to their experiences or to what they had seen other young people do in residential settings they had lived in. This found that some children and young people, when they first come into care or move to a new area, got into trouble in the home or the local community because they were experiencing emotions such as anger, sadness or confusion.

Some young people felt that having hobbies, coping strategies or care staff that could support them better with moving could reduce offending behaviour. When young people are moving into care (or are moving to different areas), good support from practitioners including Youth Offending Services and social workers can make the transition easier for the young person. Regular and reliable communication, being listened to and receiving answers to questions were key aspects which could encourage a smoother transition for children and young people.

The Staffordshire and Stoke-on-Trent report demonstrates how important it is to collect and analyse data in order to understand and tackle the problem of disproportionate criminalisation of children in residential care. We will shortly be focusing our own efforts on trying to establish a national picture. We encourage local areas to conduct their own in-depth, multi-agency analysis as Staffordshire and Stoke have done in order to address issues in their areas and protect children from unnecessary criminalisation.