Protocols to reduce the prosecution of children in care

Since the publication of the national protocol on reducing criminalisation of children in care and care leavers in 2018, local areas have been encouraged to set up multi-agency protocols to prevent children in care from being inappropriately drawn into the justice system. These protocols, the most recent of which is a Mayor of London initiative to cover the capital, aim to reduce the prosecution of children in care. But there are some important variations between them in terms of the number of agencies involved, who they support, and the type of guidance they provide.

A research project is under way to explore the content of the protocols, how they have been implemented, and what impact they have had. The first step has been to identify the number and location of the protocols. Freedom of Information requests revealed that over half (58 per cent) of police forces in England and Wales have at least one multi-agency protocol in place. Eleven police forces did not have a protocol on this topic and seven did not reply to the information request by mid-January 2021.

In total, 30 protocols were obtained and a further five are currently being developed.

It was encouraging to find so many examples of agencies working together to reduce the unnecessary police contact that children in care can experience. The map below shows the areas that are covered by a protocol. 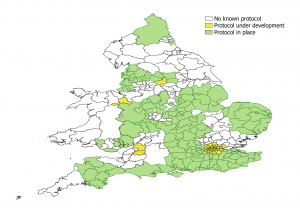 All relevant criminal justice, social care, health, and education agencies have been urged to take an active role in developing their local protocol. The Department for Education hopes that this will ensure that corporate parenting principles are applied consistently, information is shared effectively, and children in care have access to services that promote positive outcomes.

An analysis of the protocols found that, on average, four agencies were involved (ranging from two to 10). They typically included the police, children’s services, Youth Offending Teams, and the Crown Prosecution Service. Health and education services were rarely included (in just four and two protocols respectively).

Northumberland’s protocol is one example where health and education are involved. Local schools have been asked to sign up to the protocol and a training package is being developed for staff.

All relevant criminal justice, social care, health, and education agencies have been urged to take an active role in developing their local protocol.

The content of the protocols also varied, and there was evidence of three main types:

Regional protocols sought to establish consistent practice across a large area by outlining a set of key principles.The principles included striving to understand the underlying causes of a child’s behaviour, listening to their needs and perspectives, and using restorative approaches. The protocols seek to gain commitment for this way of working but do not detail the processes or procedures that should be followed.

In contrast, incident focused protocols focused their efforts on providing staff and carers with guidance on how to respond when children in care present behaviour that could be liable to prosecution. Most protocols fit into this category (73 per cent). They provide advice on when the police should be involved and encourage staff to support children informally ‘in house’ wherever possible.

In Merseyside, all staff are asked to:

“apply a ‘Reasonable Parent Test’ when determining whether to involve the Police, that is; if the incident occurred within a supportive caring family environment, would a reasonable parent involve the police?”

The pathway protocols went beyond the incident itself and considered preventative work, support for children who enter the criminal justice system, and ways to reduce further offending. Hillingdon’s protocol emphasised the practical steps that can be taken to reduce offending such as meeting a child’s health needs, celebrating their strengths, and providing opportunities for constructive leisure activities.

To date, it is unclear how well the protocols are working to reduce the number of children in care who enter the justice system. However, it was promising to find that most protocols (70 per cent) had plans to monitor their arrangements. A third were collecting local data on the arrests and outcomes of children in care to evaluate the effectiveness of their approach.

In Devon, Plymouth and Torbay, the Board overseeing the protocol plan to:

“monitor the rate, frequency and level of offending by children and young people in care so as to be satisfied that whenever possible a non-criminal response is being used for behaviour in the residential setting.”

The next step of this research project is to explore how the protocols work in practice. I hope to interview children and young people who have experience of care and the youth justice system. These interviews will explore the support they receive from staff and carers, and their perceptions of restorative and diversionary interventions. Interviews will also be conducted with a range of practitioners to explore their experiences of the partnership approach, and the facilitators and barriers to implementation.

In addition, police data will be sought to investigate the level of police contact that children in care experience before and after the protocols are introduced.

If you would like to learn more about the project or share your experiences of a local protocol, please get in touch by contacting bezeczkyz@cardiff.ac.uk

Zoe Bezeczky is a researcher at the Children’s Social Care Research and Development Centre (CASCADE) at Cardiff University. Zoe is completing a PhD to look at how multi-agency protocols can reduce the unnecessary prosecution of children in care and care leavers. This research is funded by the Economic and Social Research Council.