Faint Hope: What to do about long sentences

More people are serving indeterminate prison sentences in England and Wales than in the other 46 countries in the Council of Europe combined, research by the Howard League for Penal Reform reveals today (Thursday 3 March).

Almost 12,000 prisoners are serving either a life sentence or an Indeterminate sentence for Public Protection (IPP) – a rise of more than 250 per cent since 2001.

As the number of people serving open-ended sentences has increased, so too has the length of time they spend in prison. 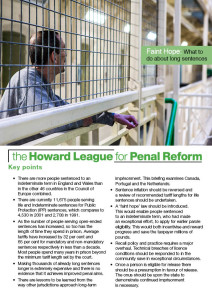 Tariffs – the minimum length of time a prisoner must spend behind bars before becoming eligible for parole – are getting longer and longer. Average tariffs for mandatory and non-mandatory life sentences have increased by 32 per cent and 75 per cent respectively in under a decade.

Most people spend many years in prison beyond the minimum tariff length set by the court.

A Howard League briefing paper, Faint Hope: What to do about long sentences, shows that there are lessons to be learned from the way other jurisdictions approach long-term imprisonment. In particular, it examines prison systems in Canada, Portugal and the Netherlands.

The paper calls for an overhaul of recall policy and the reversal of sentence inflation. It also recommends the introduction of a ‘faint hope’ law that would enable people sentenced to an indeterminate term, who had made an exceptional effort, to apply for earlier parole eligibility.

These polices would save the taxpayer millions of pounds, reduce prison overcrowding, and give prisoners a greater incentive to behave well and turn their lives around.

Frances Crook, Chief Executive of the Howard League for Penal Reform, said: “Prisoners should be incentivised to change their lives and reform, and the system has to be flexible and able to reward their efforts through earned release. Otherwise, what hope do they have? This is also important for staff, because they need to see that the efforts they make to help prisoners are recognised through the system. Prisons are in crisis partly due to the log jam at getting people through the system safely. Our recommendations will protect the public, ease prison overcrowding and enhance staff safety and morale.”

The Howard League’s research shows the extent to which long sentences are overused in England and Wales, compared with other countries. Portugal abolished life sentences 130 years ago, and there are currently only 30 people serving life in Dutch prisons.

Prisoners in the Netherlands and Portugal are given opportunities for release at several stages of a prison sentence, with the onus placed upon the state to demonstrate that continued imprisonment is necessary.

While the number of prisoners sentenced to an indeterminate term in Canadian prisons is currently at an all-time high, it is still lower than in England and Wales.

The Canadian system includes a ‘faint hope’ clause, which means prisoners serving life with a minimum tariff of 15 years, who were sentenced before 2011, can apply to have a jury review their eligibility for parole.

Almost 12,000 prisoners are serving either a life sentence or an Indeterminate sentence for Public Protection (IPP) – a rise of more than 250 per cent since 2001.

The scheme encourages good behaviour, fosters public involvement in the penal process, and identifies people whose incarceration is no longer in the public interest.

A 2010 study showed that the Canadian faint hope clause had been successful. During the first 23 years of the programme, 82 per cent of the applicants granted a jury hearing had their parole eligibility dates reduced and only four of the 130 prisoners subsequently released returned to custody.

The Howard League’s briefing paper estimates that, if a similar policy were implemented in England and Wales and just one per cent of those serving an indeterminate sentence were released five years earlier, this would amount to 584 fewer years in prison and save approximately £21.5million.

The paper recommends that, once a prisoner is eligible for release, there should be a presumption in favour of release. It should be for representatives of the Secretary of State for Justice to demonstrate that continued detention is needed, rather than on the prisoner to prove they pose no risk.

Prisoners in the Netherlands and Portugal are given opportunities for release at several stages of a prison sentence, with the onus placed upon the state to demonstrate that continued imprisonment is necessary.

The paper also calls for a significant reduction in the number of people recalled to prison each year. It suggests that, unless there are exceptional circumstances, all technical breaches of licence conditions should be responded to by the probation service in the community, as is the case in Portugal and the Netherlands.

Ministry of Justice figures show that longer sentences and increased use of recall account for up to 85 per cent of the rise in the prison population in England and Wales since 1993.

While those on recall in prisons in England and Wales are at disproportionate risk of self-injury and suicide, evidence from other countries suggests that they do not need to be there at all.