The Howard League for Penal Reform has responded to Her Majesty’s Inspectorate of Prisons’ report on Liverpool prison, published today (Friday 19 January). 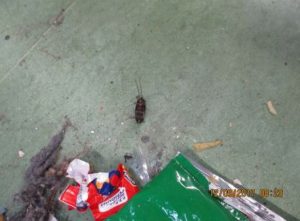 Inspectors found this cockroach among the litter in Liverpool prison

Inspectors visited the prison in September last year and found the worst conditions that they could remember, with a backlog of some 2,000 maintenance tasks.

The report states that prison leaders, from local to national, presided over an “abject failure” to provide a safe, decent and purposeful regime.

Drugs were easy to find. Violence was so rife that men were too afraid to leave their cells. Self-injury was rising.

Four men had died by suicide since the previous inspection, and two more died shortly after this inspection.

Research by the Howard League has shown that more than 3,500 additional days of imprisonment were imposed on men in Liverpool prison following disciplinary hearings, known as adjudications, in 2016 – an indication of a troubled jail.

Andrew Neilson, Director of Campaigns at the Howard League for Penal Reform, said: “Infestations of rats and cockroaches. Filthy, blocked, leaking toilets. Piles of rubbish. Broken windows. This is a litany of failure, and being caged in such squalor is never going to help people to turn their lives around.

“This report is one of the worst that the Howard League has seen in recent years. The physical condition of Liverpool prison is only one dimension of what has gone wrong in this establishment, but it does confirm that the issue goes beyond the shortcomings of the liquidated contractor Carillion. Maintenance in Liverpool and many other prisons in England and Wales is the responsibility of another contractor, Amey, and it is clear from this and other inspections that the company is also failing to deliver.

“As the Chief Inspector of Prisons has said, the issues found in Liverpool prison require resolution at a national level. Strong leadership and bold action are required to reduce the prison population and make jails safer. This would save lives, protect staff and prevent more people being swept into deeper currents of crime and violence.”