Almost 160,000 days – or 438 years – of additional imprisonment were imposed on prisoners found to have broken prison rules last year, a report published by the Howard League for Penal Reform reveals today.

Punishment in Prison: The world of prison discipline looks at how jails in England and Wales operate disciplinary hearings called adjudications, where allegations of rule-breaking are tried. 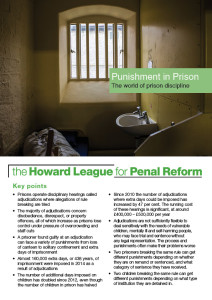 The hearings, which cost between £400,000 and £500,000 a year in total, mainly concern disobedience, disrespect or property offences, which increase as prisons lose control under pressure of overcrowding and staff cuts.

A prisoner found guilty at an adjudication can face punishments ranging from loss of canteen to solitary confinement and extra days of imprisonment.

The report reveals that the number of adjudications where extra days could be imposed has increased by 47 per cent since 2010.

The rise in the number of adjudications has come at a time when prisons across England and Wales are struggling to overcome problems caused by a growing prisoner population, chronic overcrowding and cuts of almost 40 per cent to frontline staffing.

Violence and self-injury in prisons are at their highest levels in a decade. In addition, there have been eight suspected homicides during 2015 – the highest number in a calendar year since current recording practices began in 1978.

Frances Crook, Chief Executive of the Howard League for Penal Reform, said: “‎The system of adjudications has become a monster, imposing fearsome punishments when people misbehave often as a result of the dreadful conditions they are subjected to. This bureaucratic, costly and time-consuming system of punishments then further feeds pressure on the prisons, creating a vicious cycle of troubled prisons and troubling prisoners.

Most adjudications are tried by a prison governor before whom there is no right to legal representation, except in very limited circumstances. Cases that are sufficiently serious to attract the risk of additional days may be referred to a visiting district judge.

Additional days will extend a prisoner’s date of release, but they cannot be imposed beyond the final end date of the sentence. This means that the most challenging prisoners could be released without any period on licence in the community.

The report states that adjudications are too inflexible to deal sensitively with the needs of vulnerable children and people with mental health problems. The process and punishments often make their problems worse.

Under the current system, two prisoners breaking the same rule can be given different punishments depending on whether they are on remand or sentenced, and the category of sentence they have received.

Similarly, two children breaking the same rule can get different punishments depending on the type of institution they are detained in.

James was a troubled but likeable child aged 17. He grew up in care, moving from care home to care home. He was excluded from school. By the age of 12 he was known to the police. By the age of 16 he was convicted of a serious offence. He received a three-year prison sentence.

James was placed in a prison for children aged 15 to 17. When he first contacted the Howard League he had been in prison for almost a year. He had only been allowed access to education a handful of times. He had spent long periods of time in the segregation block or confined to his cell for up to 23-and-a-half hours a day without a television or radio.

James can be difficult and disruptive. He sees violence as a survival technique in prison. But he is not beyond hope. He can engage with staff and professionals once he has established a relationship of trust. He engaged with a counsellor in prison, with whom he formed a bond.

Professionals believe that he may have mental health problems, but he has not been formally assessed.

He had numerous adjudications for fighting and disobedience. He received at least 169 extra days. James was originally due to be released as a child. The additional days meant he was released as an adult without the full support of social services as a “looked after” child.

The additional days to be served at the end of his sentence did not deter James from breaking prison rules.