Welcome to the exhibition room for the shortlisted projects for this year's Policing and children category. Here you can learn a little about all the projects and organisations, see some of their inspiring work, and find ways to connect and keep up to date with their latest news. 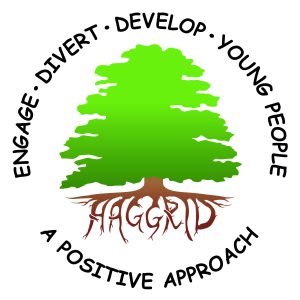 HAGGRID works with groups of young people across County Durham and Darlington who are identified as being ‘at risk’ of offending or becoming a victim of crime by their school. HAGGRID seeks to develop personal skills, facilitate informed choice, build confidence and increase self-worth, to help the young people become more integrated into their community.

Operation Inclusion can be applied to a one-off offence, or to a child demonstrating a rapid escalation of offending, which could lead to an increase from minor risk/vulnerability to behaviour reflecting a propensity to commit acts and of violence and or of potential exploitation. Case Managers then work with children and their families/carers utilising diversion and support strategies to offer those who engage a chance to change their behaviour and if they complete a three to six-month intervention, exit the service without a statutory criminal record.

Over the winter months of 2021 Brandon Community Hall witnessed a sharp rise in anti-social behaviour and damage, resulting in an increase in crime and police demand. The Shocking Behaviour Project was designed to address this issue by building a smart and accurate understanding of problem, resulting in local partnership engagement focussing on eradicating the root causes of the problem.

Multi-agency partnership working is at the core of this project. It relies on the dedication of two neighbourhood officers who work alongside the community, sharing innovation and courage in creating an educational programme and diversionary activities for young people in Brandon and the surrounding villages.

The aim of the School Responders Project is to provide a fast response to a school where an offence has taken place that is serious enough for the offending young person to be at risk of exclusion or arrest. A practitioner will promptly attend and speak to all parties involved, with a view to seeking a restorative resolution such as a conference between the parties involved, in most cases, within 24 hours of the incident.

The objectives are to; stop the unnecessary criminalisation of children, reduce the need for police intervention, reduce school exclusions, discourage children from being drawn in through social media, create a positive outcome for young people through a restorative approach and nurture a more harmonious environment within schools.

Take a look at the process of the School Responders here.

Operation Eastwood is a Cleveland Police initiative in which police employed Early Intervention Coordinators work with young people who have been identified as being at risk of becoming involved in knife crime. The young people who have been referred are usually those who have been reported to police for knife related reasons but are not subject to any criminal justice outcome, or there are concerns that the child may become involved with such weapons. The interventions take place over three sessions, typically delivered within a month-long period. All sessions are interactive and the children take an active part in the discussions.

In 2021 the Early Intervention Coordinators worked with 56 young people, of these only 2 children reoffended in any way that related to weapons or violence, giving Op Eastwood a 96% success rate. The national recidivism rate in young people currently sits around 36%, demonstrating the effectiveness of Operation Eastwood.

Find an evaluation of Operation Eastwood here, and a lesson plan example here.

North Yorkshire Police launched Operation Divan in September 2018 with the aim to reduce the number of young people carrying weapons by raising awareness of the consequences.

North Yorkshire Police has worked in partnership with education, early help, social care and youth justice to support those aged under 18 who have been, or are thinking, of using or carrying knives and other weapons associated with ‘county lines’ including drugs, child exploitation and bullying. Any young person identified under the process is asked to voluntarily take part in an intervention led in the main by North Yorkshire Police’s School Liaison Team.  The resources used follow Department of Education guidelines and sessions are tailored to the individuals’ learning needs and ability.

Join us online for the Community Awards ceremony on Tuesday 22 November 2022, 10am-12pm – book your place here.