In November 2013, the Ministry of Justice introduced a blanket ban on loved ones sending in books and other essentials, such as underwear, to prisoners. This was part of a crackdown on what ministers described as prisoners’ “perks and privileges”.

At the Howard League for Penal Reform, we know this is wrong. People are sent to prison as a punishment, not for a punishment. Books and essentials such as underwear should not be seen as perks or privileges. Reading books goes hand in hand with education, with rehabilitation, with humanity. We should do everything we can to encourage reading and not restrict a prisoner’s access to books.

We launched the Books For Prisoners campaign in March 2014. In the first week of the campaign a letter was sent to the Daily Telegraph from many of the country’s leading authors, thousands of Howard League supporters tweeted ‘shelfies’ to the Ministry of Justice, and the Poet Laureate Carol Ann Duffy staged a poetry reading – ‘The Ballad of Not Reading in Gaol’ – outside Pentonville prison in north London.

As the campaign progressed, authors delivered a letter to the Prime Minister, David Cameron, the Howard League staged a silent protest as the Justice Secretary gave evidence to a parliamentary committee, and Santa visited the Ministry of Justice as part of ‘A Christmas Carol’. By the end of 2014 the High Court had ruled the restrictions unlawful. 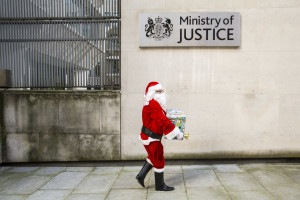 Santa along with the Howard League and English PEN delivering books for prisoners to the Ministry of Justice HQ, central London.

In 2015, the Howard League won a Charity Award 2015 for the Books For Prisoners campaign, which was described as having “every aspect you could want from a campaign” by the judges.