A teenager who stole sweets and ice cream worth £5, a woman found begging in a car park and a man who kicked a flower pot after being stabbed were among thousands of people ordered to pay a controversial charge which penalised the poor and encouraged the innocent to plead guilty.

In April 2015 magistrates and judges were told they must impose a mandatory criminal courts charge of up to £1,200 on anyone convicted of an offence, whatever their circumstances might have been. This was on top of fines, compensation orders, victim surcharges and costs. There were even plans to charge interest and people can be sent to prison if they can’t pay.

This charge was both unfair and unrealistic. Taken as a whole, the criminal courts charge was unjust.

These escalating charges were unfair as they put pressure on people to plead guilty at the earliest opportunity, even if they have not committed an offence.

The mandatory nature of the charge meant that sentencers were forced to impose it even when it was clear the person before them did not have the means to pay. There were cases of petty offences reported in the local media showing how this unrealistic charge made a mockery of the justice system. People who were homeless and begging, addicted to drugs and alcohol or with mental health problems were given charges when it was unclear how they would ever make the payment.

The injustice of the charge swiftly made waves, with some magistrates  resigning in protest. 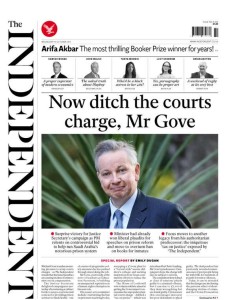 What the Howard League did

Tweeting with the hashtag #criminalcharge, we highlighted unfair cases on a daily basis as they were reported in the local media. We composed a dossier of cases which we press released and this led to widespread media coverage, including a series of front page splashes by The Independent. Within the space of only four months, the Ministry of Justice caved into our pressure and announced the criminal courts charge would be scrapped.