Join the Howard League lawyers' network and receive notifications of meetings and updates on the work of our legal team.

The group meets regularly to discuss and debate legal issues arising from our legal and policy work. It is open to members of the legal profession and others who have an interest in penal reform.

This joint Howard League and T2A event launched four short films to embed the growing consensus that young adults require a distinct approach within the criminal justice system. Clips from the films were shown along with an expert panel discussion. The discussion explored how the information in the films could help practitioners to recognise and meet young adults’ needs.

Making Black Lives Matter in the Criminal Justice System – an antiracist guide for lawyers a Howard League Law and Practice Seminar was held on Wednesday, 30 June 2021.

This event launched the Howard League’s practical guide for antiracist lawyers, developed in association with Black Protest Legal Support and in consultation with an expert advisory group. The guide is designed to support lawyers to be antiracist at each phase of a client’s journey through the system.

The recording of the webinar is can be viewed here.

The guide can be downloaded here.

Making sure Black lives matter in the criminal justice system – practical steps towards change event, in association with Black Protest Legal and Doughty Street Chambers, was held online on 28 July 2020.

The Howard League is acutely aware from its specialist legal service for children and young people in prison that it is time to work together to see what practical steps lawyers and practitioners in the system can take to change outcomes in the system. In association with Black Protest Legal, we want to develop a short practical guide on how to be an anti-racist lawyer. A new Advisory Board will assist on content. This panel-led discussion considered those issues which would inform development of the guide.

What if the dock was abolished in criminal courts? was held on Wednesday 22 January 2020 at Garden Court Chambers

The event launched a think piece by Professor Linda Mulcahy, University of Oxford, Dr Emma Rowden, Oxford Brookes University and Associate Professor Meredith Rossner, which advocates for the abolition of the dock in English and Welsh courtrooms and aimed to stimulate debate among practitioners on how to challenge the routine use of the dock for child and adult defendants in criminal proceedings.

What if the dock was abolished in criminal courts? pamphlet can be downloaded here.

The event was chaired by Caoilfhionn Gallagher QC, Doughty Street Chambers with presentations by: 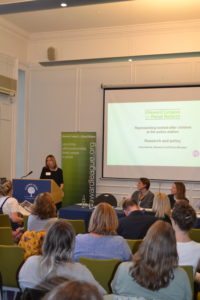 Reducing the criminalisation of looked after children at the police station masterclass was held on Tuesday 24 September 2019 at Garden Court Chambers.

Representing looked-after Children at the police station: a step-by-step guide for lawyers was launched the event.

By submitting your information you are agreeing to the Howard League keeping you informed about our work by email and, occasionally by telephone and post.